Rütli – the quiet meadow by the lake

The Rütli meadow is seen as the birthplace of Switzerland. Below Seelisberg, in a clearing slightly above Lake Uri on the opposite shore to Brunnen and the two Mythen mountains, delegates from Switzerland’s three founding cantons are said to have sworn the Rütli Oath in 1291 – a pact that determined the action they would take in common against the foreign bailiffs in their valleys. “We want to be a band of brothers, sticking together through thick and thin!”

Over the years, the Rütli came to be regarded as a “national shrine” of sorts. The meadow was purchased with the aid of a collection by schoolchildren in 1859 – in order to protect it from proposed hotel building – and subsequently donated to the state with the proviso that it should remain sacrosanct.

Its historical symbolism carries immense weight. The Rütli has always been a gathering place in times of danger: General Guisan, for instance, summoned the entire Swiss Army command to the meadow for his famous “state of the nation” address on 25 July 1940. Since 1860, the traditional Rütli shooting competition has been held every Wednesday before Martinmas, and Swiss National Day celebrations have been held on 1 August since 1891.

For many distinguished guests from abroad, a visit to the Rütli has been, and remains to this day, the highlight of a visit to Switzerland. The “Fairy-Tale King” Ludwig II of Bavaria paid several visits to the Rütli. 1980 saw Queen Elizabeth II of the United Kingdom arrive at the Rütli by paddle steamer.

The Rütli these days is a peaceful sanctuary on the lake, with an efficient restaurant nearby, three fountains, the Rütli meadow and picnicking areas. The Rütli is car-free and can be accessed only by boat or on foot via the Swiss Path from Seelisberg or Treib (walking time: one hour).

At the entrance to Lake Uri, a boulder almost 40 metres in height can be seen protruding from the water.

Originally dubbed the “Stone of Myths”, this natural monument was shortened by one-third and, in 1859, renamed the Schiller Stone in commemoration of the 100th birthday of Friedrich Schiller, who had premiered the drama “William Tell” in Weimar in 1804. Since then it has borne the inscription “To the Singer of Tell / F. Schiller / The Founding Cantons / 1859”.

The Schiller Stone is not accessible from land. A striking view of the Stone may be obtained from the boat travelling between Brunnen and the Rütli.

To offer protection from the stormy south wind or foehn in Lake Uri, a harbour was built early on at Treib.

The Haus zur Treib (House at Treib) was first mentioned in 1482. It was here that the Old Swiss Confederacy of five cantons held 72 legislative and executive council meetings. The council chamber remains part of the Haus zur Treib, which is open to the public as an inn. The building has been regularly refurbished in the same style (most recently in 1982). It may be reached by boat, by the Treib-Seelisberg funicular and by car from Seelisberg.

The little castle stands on the Swiss Path, on the old mule track between Lucerne, Seelisberg and Altdorf at the southern end of the village of Seelisberg.

It was first mentioned in a document dating from around 1500 and is the ancestral seat of the Beroldinger family, which for decades played a leading role beyond the valley of Uri. The castle is not a fortress but rather a lovely country manor offering glorious views of Lake Uri and the Reuss Valley.

Its particularly remarkable chapel from 1545 is dedicated to St. Laurence. The winged altar, choir screen and rococo stucco work on the ceiling are well worth seeing.

Beroldingen Castle can be reached on foot in about 30 minutes from Seelisberg Oberdorf (bus stop: Tanzplatz).

The monument to Father Alberik Zwyssig stands in front of Bauen Church. He was born in 1808 in this village on Lake Uri, which has something of a Mediterranean flair.

Father Alberik Zwyssig is the composer of the Swiss national anthem.

Bauen can be reached by boat or by car from Flüelen via Seedorf and Isleten.

This picturesque moated castle-like edifice was built between 1555 and 1562 by the influential army captain, Peter A Pro. The architecture of the castle blends stylistic borrowings from the late Gothic and Renaissance periods.

Now a restaurant, its rooms feature Renaissance panelled ceilings; some rooms have wall panels and ancient door surrounds, as well as a tower stove. The green room, which is used for weddings, features murals depicting scenes from the Old Testament dating from around 1686. Frescoes can be seen in the corridor on the ground floor: these originated from the second Tell Chapel.

This is the spot on Lake Uri where William Tell is said to have saved himself by leaping out of Bailiff Gessler’s boat.

A chapel was erected here as early as 1388. The present chapel, decorated with four magnificent frescoes by the Basel artist Ernst Stückelberg depicting “The Rütli Oath”, “Shooting the Apple”, “Tell’s Leap” and “The Death of Gessler in the Hohle Gasse”, was built in 1879/80. A waterborne pilgrimage to the chapel involving local people takes place every Friday after Ascension Day.

The “Fairy-Tale King” Ludwig II of Bavaria wanted to erect a large Tell in the water symbolising Tell’s Leap: it would have been so big that even the large paddle steamers could have passed between its legs – not unlike the Colossus of Rhodes.

The largest carillon in Switzerland was installed above Tell’s Chapel in 2001; it plays one of its many melodies every hour on the hour.

Tell’s Chapel can be reached by boat or on foot from the car park of the Hotel Tellsplatte, which is on Axenstrasse.

After the oath of solidarity sworn on the Rütli meadow in 1291 by the three founding cantons of Uri, Schwyz and Unterwalden had proved its worth in the Battle of Morgarten, the cantons renewed the oath of brotherhood against foreign bailiffs in Brunnen in 1315.

From then on the three valley cantons called themselves Swiss Confederates. The village chapel of Brunnen, also known as the Federal Chapel, stands on the spot where this second oath is said to have been sworn.

The chapel is located in the immediate vicinity of the Brunnen landing stage and bus station, on the main road some seven minutes’ walk south from the railway station. 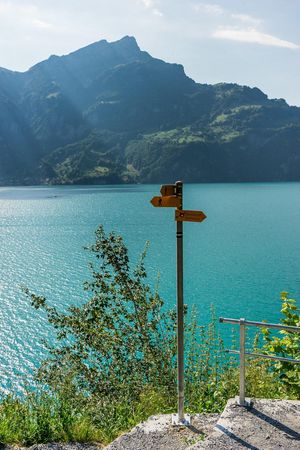 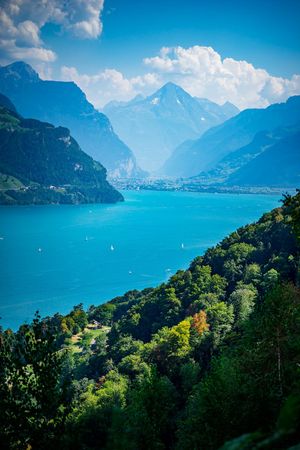 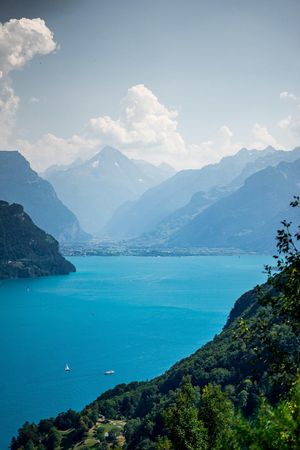