The chapel in Ingenbohl is first mentioned in a letter of indulgence from 1387. St. Leonard and St. Pantaleon have always been the church patrons of Ingenbohl.

Until the early 13th century, the chapel – which belonged to Schwyz at the time – was dedicated to St. Pantaleon, and subsequently to St. Leonard. From 1479 to 1481, a new building with three altars was erected on the same spot. The chapel was enlarged in 1607. The cemetery was added in 1613. Ingenbohl was able to split off from the parish of Schwyz and became its own parish. The new parish building was constructed between 1658 and 1661. This is also when the ossuary was created. The church tower was renovated in 1832. In 1927, the Schwyz-based architect Josef Steiner was commissioned to expand and renovate the church. Additional restoration work was carried out around 50 years later, between 1976 and 1978, and then once more in 2011.  The oldest bell dates from 1403. 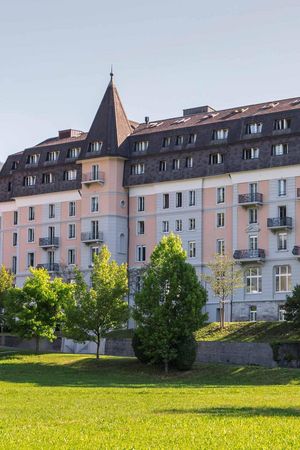